if you subscribe
We like to be comfy with our newsletter as we do with our items. Never too much, never too little, just the right fit. We send only those kinds of stuff we think may be interesting for you as a sportive woman. You can either sign up to read it or just for the 10 % discount on your first purchase. In any case, the button to click is the same. 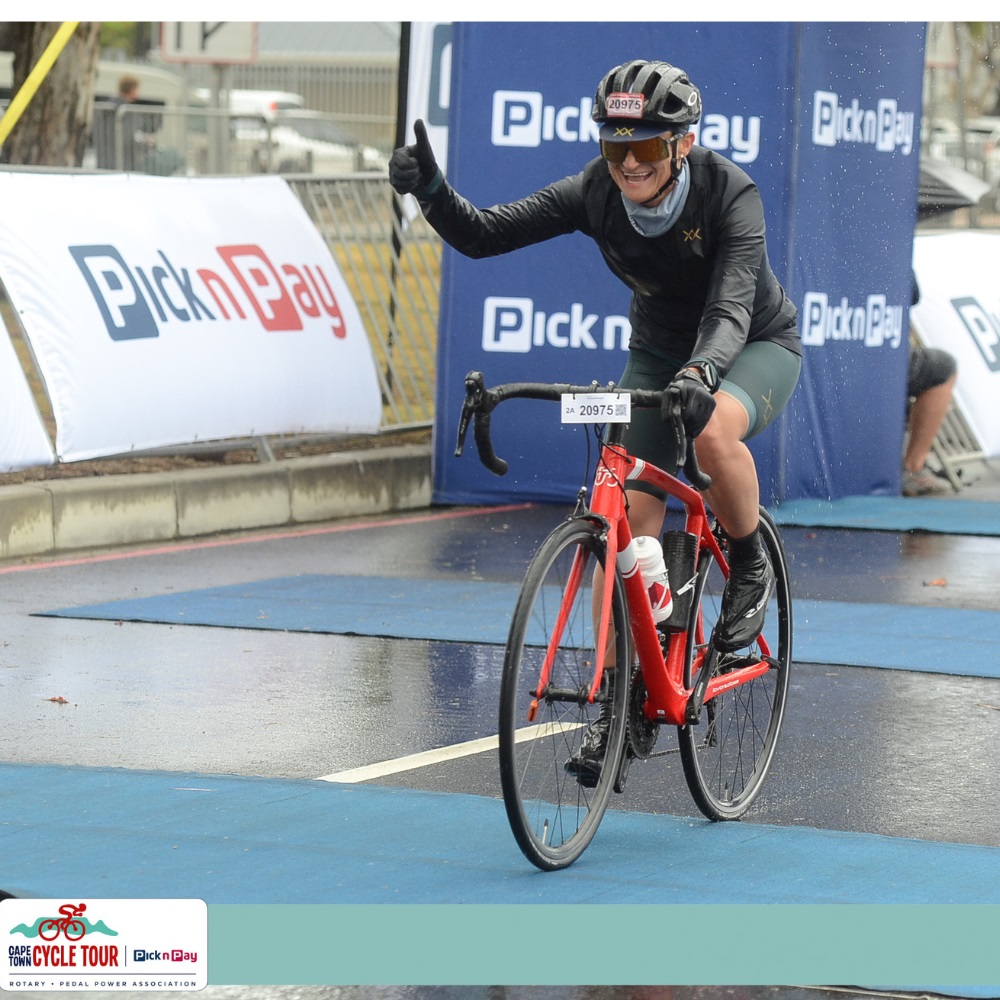 Cycling in South Africa – Some Tips from Claudia

Early this year our ambassador Claudia Rier @Claudiafromthedolomites has been cycling in South Africa and competing on the world’s biggest road bike race “The Cape Town Cycle Tour”. She shares with us insights about her experience traveling around South Africa, which places took her breath away and which were her favorite cycling routes from all those she explored. Here’s her story: 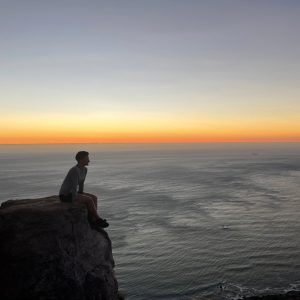 On the first day of my stay in South Africa, I left my hotel at 6:00 pm to walk up to the 669meters-high Lion’s Head. At the top I was speechless with the 360º view. Simply breathtaking. What I did not know is that Lion’s Head is a pilgrimage mountain for sunset worshippers. I soon realized this as more and more mountain enthusiasts reached the summit.

Many were equipped with snacks and drinks, preparing for a few hours of sunset watching. I too, unintentionally, came to enjoy this. I met a couple of siblings from Wellington and they spontaneously invited me for a bottle of MCC (the sparkling wine from South Africa, Methode Cape Classique), a bottle of white wine and a bottle of red wine. We ate some Bitong meat and other snacks while enjoying the sunset. 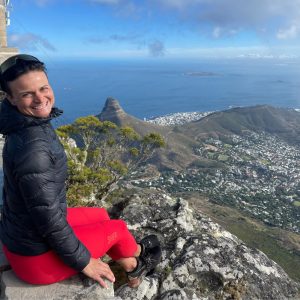 This is THE mountain in Cape Town. It is basically the Schlern* of South Africa 😉 When you look at it from the Blouberghstrand, the Table Mountain resembles very much the Schlern and its Santner!

For some days, Table Mountain became my local mountain. Every day before breakfast I walked up, twice en route Platteklip Gorge and the other times through the India Venster, which runs directly under the cable car. The India way is the most challenging because it involves a bit of a climb, almost a light via ferrata as we would say. I like this one better because it is more varied. The flora and fauna is awesome here, there are more different types of plants on Table Mountain alone than in the whole of the UK. The panorama on Table Mountain is also breathtaking. You are on the mountain, and below you see the city just waking up early in the morning, along the Atlantic Ocean. It really was a very special place there!

* Schlern: famous peak in the Dolomites

Cycling in the Winelands 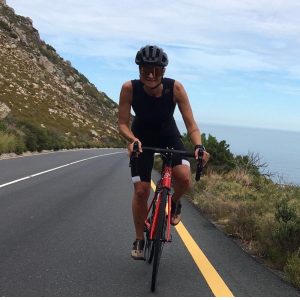 I cycled 4 intense but beautiful bike tours in the Winelands of Cape Town with the local bike tour operator Cape Cycle Tours.

On the first day we rode from Cape Town to Stellenbosch, 102 km with 700 height meters. The roads in South Africa are perfectly paved and almost everywhere there is a strip almost 2 meters wide, next to the two lanes of the road, where you can even cycle side by side. We cycled through the wineries of Durbanville to the country’s largest university town, Stellenbosch. There we checked into the small Eendracht Hotel and in the afternoon stopped by the prestigious Delaire Graff winery and the posh Tokara for a wine tasting.

The following day we cycled from Stellenbosch to Franschhoek in 114 km and 1100 hm via detours, passing Victor Vetter Prison, where Nelson Mandela was imprisoned in 1990. Our stop there was at the LAB Hotel. Franschhoek is known for its wineries like La Motte, Le Petite Ferme or Colman, a pure sparkling wine producer, which is called MCC Methode Cape Classique here. But cool breweries are also very hip here, like TukTuk or Hey Joe Brewery.

I was looking forward to day 3 the whole time, because we cycled over the famous Franschhoek Pass, which was built in 1833 by the Royal African Corps: 7.3km long with a gradient of 6.3% to Hermanus, 104km and 1600hm.

Hermanus is very famous for whale watching in November/December. We checked in at the Windsor Hotel Hermanus, located by the sea and went directly for food/wine pairing to the famous Crescent winery in the wine hills in the hinterland of Hermanus.

Last but not least, on day 4 we cycled along the coast from Hermanus to Gordon’s Bay with 82km and 1000 hm. The mountain landscape, the sea on the horizon, the Cape… it was really wonderful to cycle along the coast.

After refreshments and a snack, I headed back to Cape Town to get in the mood for the Capetown Cycle Tour.

The Capetown Cycle Tour is like a people’s race. In addition to elite riders who start at 06:00, the locals, who are not so often in the saddle, also participate. All roads are closed from 05:00 clock in the morning to 17:00 clock in all of Cape Town and up to the Cape. We cycled there on the 4 bulky highway. I had already been in South Africa for almost 3 weeks and had not yet experienced a day with rain. It was always only sunshine, dreamlike! But what happened on Sunday morning during the Capetown Cycle Tour? It was pouring!

It never crossed my mind not to participate. Since I had a great start number, I could start right behind the pros in the 2nd start group. Of course already on the way from my guesthouse to the start I was soaked wet, but I did not care, because it was not so cold. I hadn’t finished arriving in the starting block and the race fever had already grabbed me. The mood of the cyclists, the music that pushed us up, this vibe! It was a fantastic feeling and  I was ready! It rained and rained and did not stop until the finish line.

I was in a good mood and was able to hold on to a group of cyclists. This was very useful as there were often really strong gusts of wind. Sadly, none of the cyclists on this day could really enjoy the wonderful landscape, the views and the sea. We cycled up the famous Chapman Peak Drive, without really enjoying the panorama, because there was none! On the descents, some cyclists in front of me came to a crash, nothing serious, it’s just not ideal to ride full speed on a rain-soaked road with the slim road tires. I held back speed-wise on the descents and let myself be cheered on by the spectators along the course and then happily crossed the finish line with a time of 3:45 hours!

Since I extended my stay, I had repeated the tour when the weather was much nicer!

Check out all the cycling and training clothing from SHER that Claudia took with her to South Africa: 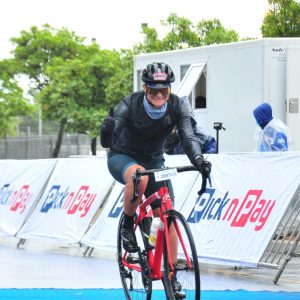 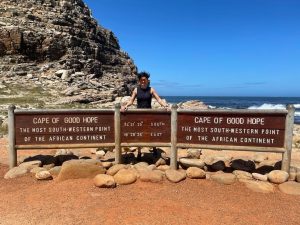 Product added to cart
There are no products in the cart!
Continue shopping
0